Singer and actor Mandy Moore recently announced that herself and husband, Taylor Goldsmith, are expecting their first child together.

The pair, who have been dating since 2015, finally got engaged in September 2017 before marrying in an intimate backyard ceremony in November 2018. They announced the baby news on Instagram in September.

Mandy has been starring as mom-of-three Rebecca Pearson on NBC’s romantic family drama This Is Us, which aired its season five premiere just last week. Her reappearance on our TV screens has led to many fans wondering when she’ll be giving birth and how the show is going to manage with her increasing baby bump.

Thankfully, Mandy has already given us a massive hint about when we can expect the baby to arrive.

So, when is Mandy Moore’s due date?

Mandy broke the news that herself and husband, musician Taylor Goldsmith, were expecting back on September 24 with a series of adorable black and white photos posted to Instagram. The pair posed with Taylor placing his hand tenderly on Mandy’s bump.

At the time, the Chasing Liberty star also revealed that she’s having a baby boy. She captioned the pic, “Baby Boy Goldsmith coming early 2021 💙”

The word “early” is a little vague, but as PopSugar reported, most couples wait about three months before telling people they are pregnant. Considering that and the couple’s September announcement date, an educated guess of late March or early April seems to be on the cards. 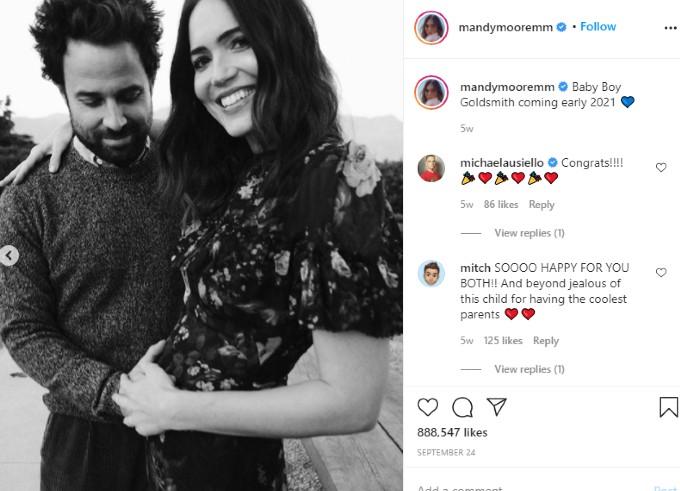 This Is Us show will hide Mandy Moore’s pregnancy

The 36-year-old has had to wear a fake baby bump while on the set of This Is Us on several occasions; however, her current bump is for real. The only problem is that the storyline doesn’t feature a pregnancy this season, so producers need to find ways to hide the bump.

Mandy has said that show creator, Dan Fogelman, was one of the first to hear about the pregnancy. Thankfully, he and the other cast members have been super supportive.

Fogelman doesn’t see any major problem with hiding Mandy’s pregnancy on the show; in a year where TV production has struggled with COVID-19, this is a relatively small problem. However, Fogelman has also said we may not see Rebecca Pearson on screen for a few episodes.

Moore has been active in politics for many years now; in 2016, she appeared at the Democratic National Convention, where she lent her support to Hillary Clinton. For this year’s election, the I Wanna Be With You singer has endorsed Joe Biden for president and has been actively campaigning for her guy on social media.