Kirk Douglas died on February 5 at the age of 103 and has reportedly left his most of his $61 million fortune to charity. According the The Mirror, the veteran actor gave away $50 million, which is to be distributed through the Douglas Foundation, which aims to “help those who cannot otherwise help themselves”.

Kirk Douglas being Spartacus even after Death

Their website states: “Its primary focus is improving the education and health, fostering the well-being, and most importantly developing new opportunities for the children who hold our future in their hands.”

According to the publication, beneficiaries of the fortune will include St Lawrence University, Culver City’s Kirk Douglas Theatre, the Children’s Hospital of Los Angeles and Westwood’s Sinai Temple, which “houses the Kirk and Anne Douglas Childhood Centre”.

Where the remaining $11 million will go was not confirmed, but the outlet claimed that acting son Michael Douglas, who has an estimated net worth of $300m, will not receive any inheritance from his father. 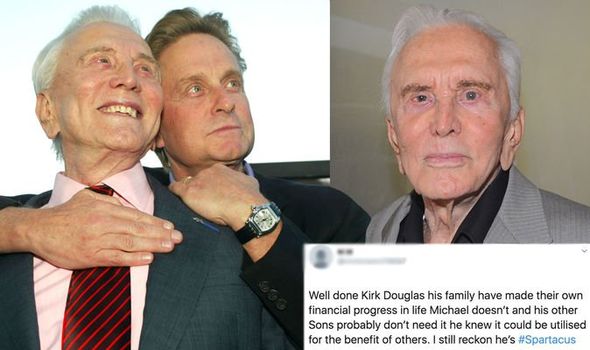 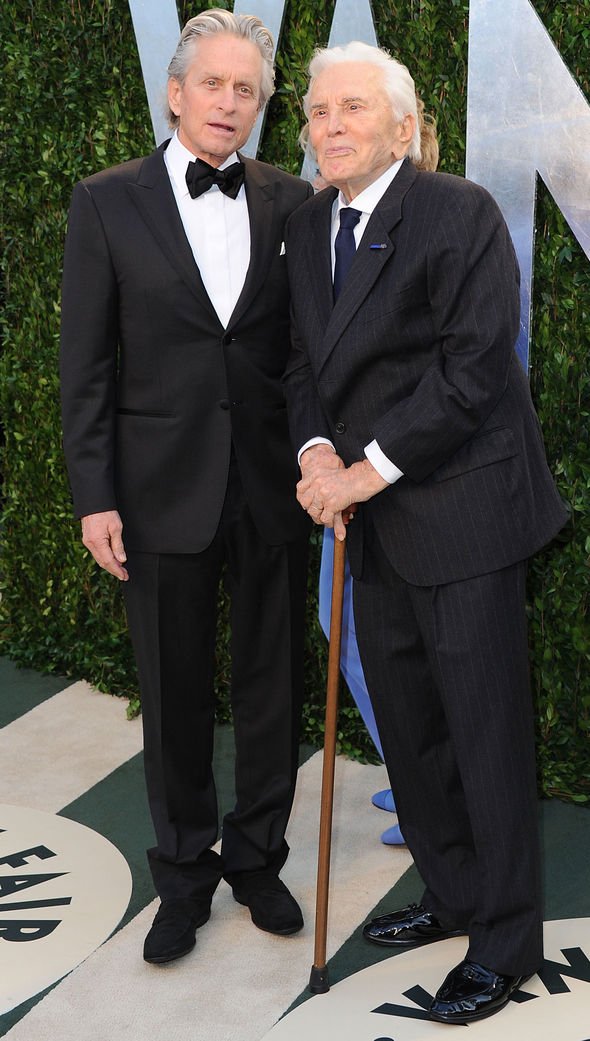 “It’s used as a shock headline or click bait that Kirk Douglas didn’t leave anything for Michael, his son, in his will, but that’s deceptive because Michael is rich AF anyway. Of course it made sense to leave the money to charity,”(sic) one fan slammed various publications for calling the act a “snub”.

Another cheered: “Well done Kirk Douglas, his family have made their own financial progress in life Michael doesn’t and his other sons probably don’t need it he knew it could be utilised for the benefit of others. I still reckon he’s #Spartacus.”

A third said: “Not a snub Michael got his own money why would he need his dad’s #kirkdouglas.”

“Kirk Douglas being Spartacus even after Death,” a fourth applauded his generosity even after his passing.

Others agreed with the sentiments, congratulating the late actor for his act of kindness. 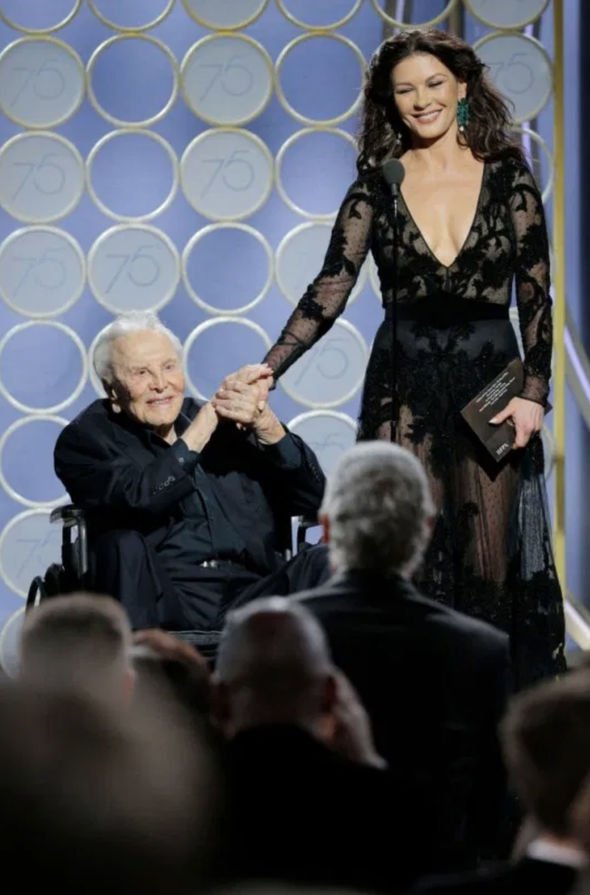 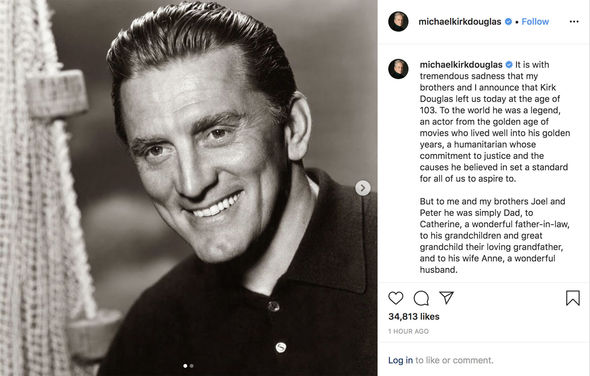 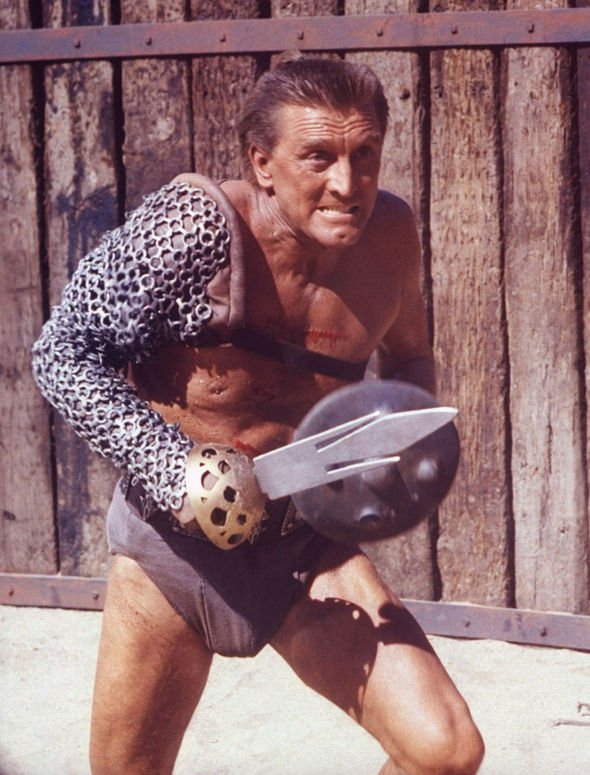 Michael announced his dad’s death earlier this month on Instagram, where he wrote a moving tribute to the actor.

He penned: “It is with tremendous sadness that my brothers and I announce that Kirk Douglas left us today at the age of 103. To the world he was a legend, an actor from the golden age of movies who lived well into his golden years, a humanitarian whose commitment to justice and the causes he believed in set a standard for all of us to aspire to.”

He continued: “But to me and my brothers Joel and Peter he was simply Dad, to Catherine, a wonderful father-in-law, to his grandchildren and great grandchild their loving grandfather, and to his wife Anne, a wonderful husband.

The Wall Street actor also praised his dad’s charitable ways in the moving announcement, saying: “Kirk’s life was well-lived, and he leaves a legacy in film that will endure for generations to come and a history as a renowned philanthropist who worked to aid the public and bring peace to the planet.”

He finished his Instagram message by writing, “Kirk’s life was well lived, and he leaves a legacy in film that will endure for generations to come, and a history as a renowned philanthropist who worked to aid the public and bring peace to the planet.

“Let me end with the words I told him on his last birthday and which will always remain true. Dad- I love you so much and I am so proud to be your son.”

Kirk was a three-time Oscar nominee, known for his roles in Spartacus and Ace in the Hole.

He also broke the Hollywood blacklist and received a standing ovation when he appeared at the 2018 Golden Globes to present the award for best screenplay, for his service to the industry.

Michael’s wife Catherine Zeta-Jones, posted a black and white photo showing her giving her famous father-in-law a kiss on the cheek, shortly after her husband’s touching post.

The Welsh actress wrote: “To my darling Kirk, I shall love you for the rest of my life. I miss you already. Sleep tight.”

US actor Sylvester Stallone, Danny DeVito, film producer Steven Spielberg, Star Trek’s George Takei and William Shatner were among celebs gushing to commend the actor in the wake of his death.