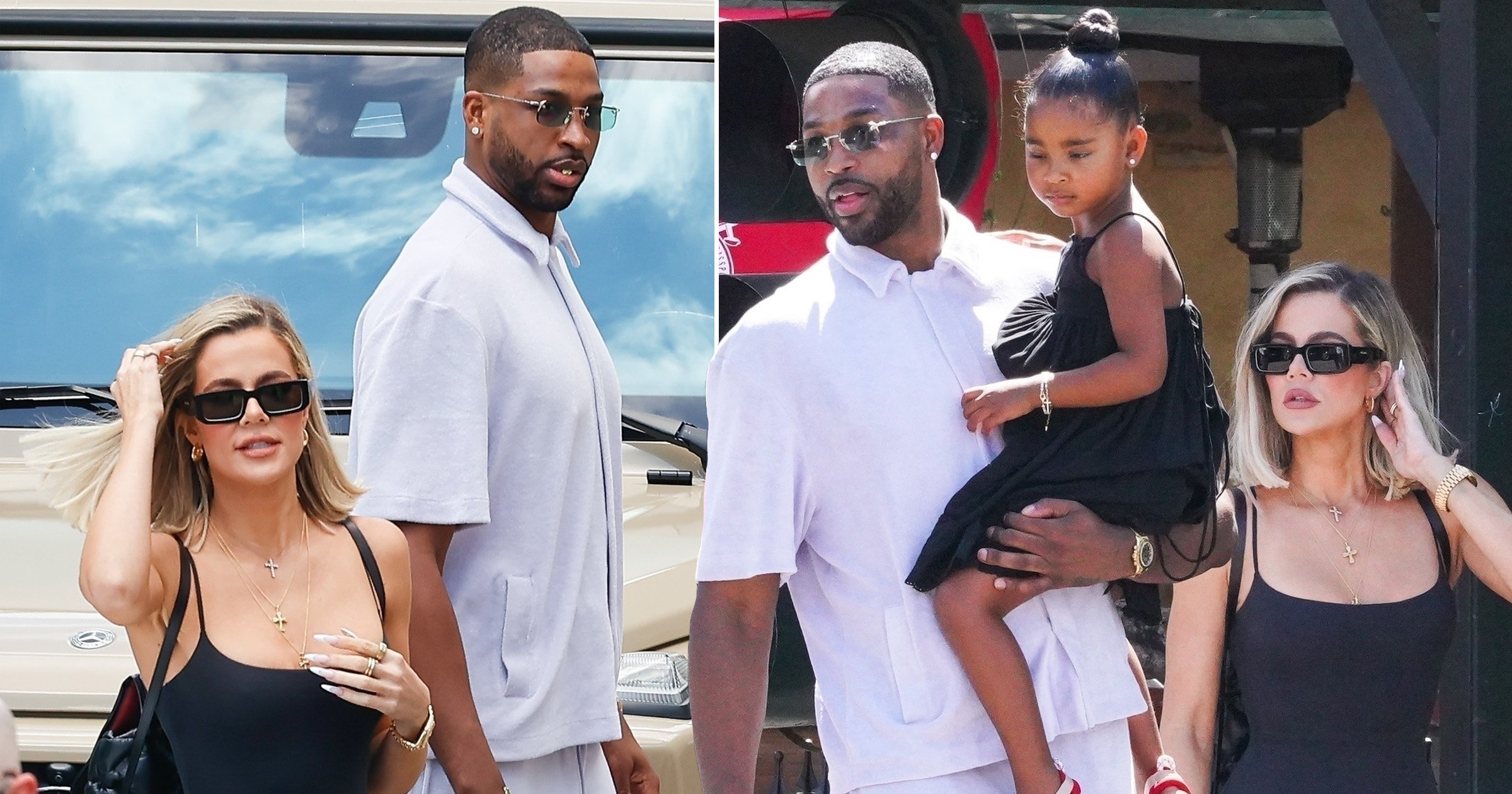 Khloe Kardashian was spotted out in Calabasas with ex Tristan Thompson and their daughter True on Saturday, just after his cheating scandal played out on the finale of The Kardashians.

Tristan also surprised the world – and provoked Kardashian fans – when he made a surprise appearance in Drake’s polygamy-themed music video for Falling Back, which dropped the day before.

However, the former couple continued with their mission to co-parent amicably as they had lunch together at Sagebrush Cantina and Saloon alongside Khloe’s mum Kris Jenner and her niece Dream – daughter of brother Rob and his ex Blac Chyna – as well as two of sister Kim’s children, Chicago and Psalm.

She teamed her dress with chunky white trainers, a heavy gold watch and a collection of gold cross necklaces on delicate chains.

The 37-year-old wore her blonde hair straight, sleek and side-parted, keeping her sunglasses on as she exited the establishment with Tristan, 31, who was holding True in his arm.

The family seemed relaxed, with momager Kris, all in black with statement silver hoop earrings, also snapped walking next to Tristan as she chatted with the father of her grandchild.

As an attentive Khloe and Tristan put their daughter into the backseat of an SUV before driving away, they seemingly shared an awkward side hug, with Tristan putting his arm around Khloe.

During The Kardashians’ season one finale, which dropped on Thursday, the reality show revealed that Khloe only learned of Tristan being unfaithful to her again when the rest of the word did, which she branded ‘an additional slap in my face’.

Chicago Bulls player Tristan fathered a baby son with Maralee Nichols, born in December, sleeping with her on his 30th birthday when he was reunited with Khloe.

Tristan accepted he was the father of baby Theo following the results of a paternity test, issuing a lengthy public apology at the time, saying sorry to Khloe for his actions.

The pair dated for five years on and off, with their relationship plagued by cheating accusations against Tristan.

Khloe confirmed the end of their relationship and was seen packing up a removal box and sealing it with tape during the show’s finale, telling viewers: ‘I wanted to believe that Tristan could change. I wanted to trust him.’

She also verified that she was not back together with Tristan – nor seeing another NBA player – on Saturday when she responded to speculation on a Kardashians fan page.

‘Definitely NOT true!!!’ she began, before adding her appreciation after they expressed hopes for her finding a love like Travis Barker, who is married to sister Kourtney Kardashian.

‘Thank you for the nice wishes but I am not seeing a soul. I am focusing on my daughter and myself for a while,’ Khloe wrote.