Sebastian Vettel to retire from F1 at end of season

Jeremy Clarkson, 62, took to Twitter and shared a message about Sebastian Vettel’s retirement news. The four-time world champion revealed the decision to leave the sport had been a “difficult one” but admitted he wanted to spend more time with his children.

The 35-year-old shared his concerns over the climate emergency and F1’s role as a contributor to the problem played a part in his decision-making process and that he was “scared” at what the future might hold for him.

Vettel is currently driving for Aston Martin and made his F1 debut in 2007.

In recent years, the racecar driver has been increasingly vocal about environmental and social issues.

He has of late expressed his ambivalence at competing in F1, a sport that has an enormous carbon footprint because of the air travel involved. 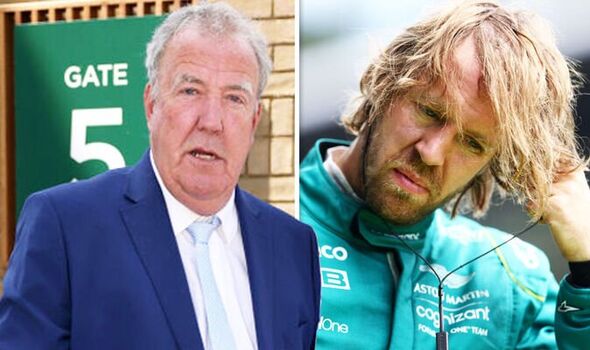 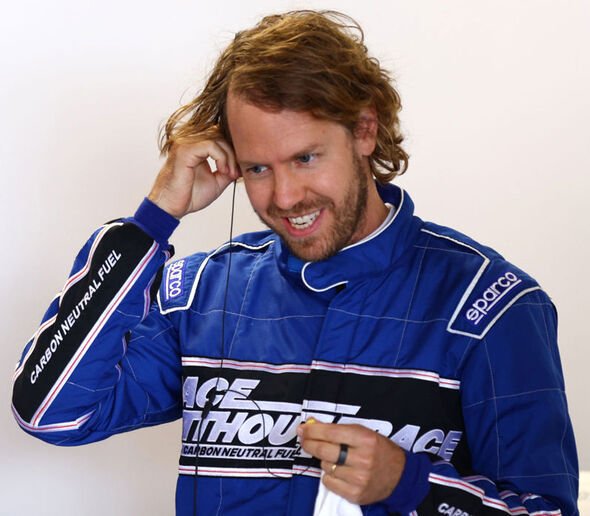 Taking to Twitter today, the former Top Gear presenter wished the German driver well adding he will be a “brighter star” outside of F1.

In view of his 7.8 million followers, Jeremy penned: “Seb was a bright star in F1 but I think he’ll be even brighter when he’s out of it.”

Twitter user, @dangermouseirl tweeted: “He can put his underpants on outside again and save the planet from global warming, hurrah!” 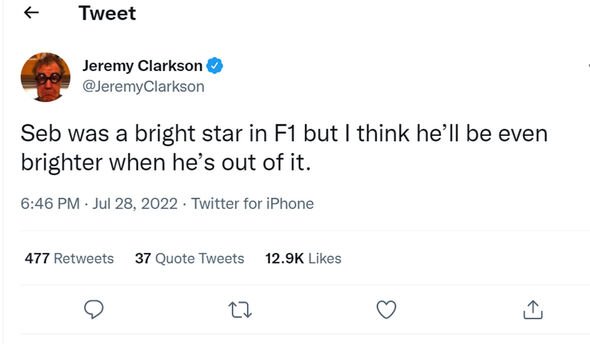 To which Jeremy replied: “No no no. He’s a very funny man and he has an opinion on things. You might not share that opinion but so what?”

@gsxrmatt commented: “I thought he was a nice chap on Top Gear all those years ago.”

@jcp45 remarked: “I agree, he will be a star on TV should he wish it. I will say I wasn’t a fan when he was with Red Bull, afterwards you started to see ‘him’. Good luck to him.”

@hrob74 wrote: “I think that’s the nicest thing you’ve ever said about a F1 driver, or ever…”

@InfoCone added: “I take it you’ve met him, funny guy and such a genuine decent human being. More people like him the better.”

Addressing his retirement news, Vettel said: “The decision to retire has been a difficult one for me to take, and I have spent a lot of time thinking about it; at the end of the year I want to take some more time to reflect on what I will focus on next; it is very clear to me that, being a father, I want to spend more time with my family.

“But today is not about saying goodbye. Rather, it is about saying thank you – to everyone – not least to the fans, without whose passionate support Formula One could not exist.”

He continued:  “I have had the privilege of working with many fantastic people in Formula One over the past 15 years – there are far too many to mention and thank. Over the past two years I have been an Aston Martin Aramco Cognizant Formula One Team driver – and, although our results have not been as good as we had hoped, it is very clear to me that everything is being put together that a team needs to race at the very highest level for years to come.

“I have really enjoyed working with such a great bunch of people. Everyone – Lawrence, Lance, Martin, Mike, the senior managers, the engineers, the mechanics and the rest of the team – is ambitious, capable, expert, committed and friendly, and I wish them all well.

“I hope that the work I did last year and am continuing to do this year will be helpful in the development of a team that will win in the future, and I will work as hard as I can between now and the end of the year with that goal in mind, giving as always my best in the last 10 races.”

Aston Martin had recently made it clear that it wanted Vettel to stay and talks had already started on his future.

The team’s executive chairman, Lawrence Stroll, said: “We made it clear to him that we wanted him to continue with us next year, but in the end he has done what he feels is right for himself and his family, and of course we respect that.

“He has driven some fantastic races for us, and, behind the scenes, his experience and expertise with our engineers have been extremely valuable.”