Mother-son bonding! Jennifer Garner and son Samuel stepped out for lunch in Los Angeles ahead of the long weekend.

Jennifer Garner stepped out for lunch with the sweetest date: son Samuel, 9. The actress, 49, enjoyed a lunch date at the Brentwood Country Mart in Los Angeles ahead of the long weekend on Friday, Sept. 3. She and her youngest child with ex-husband Ben Affleck held hands for the outing. 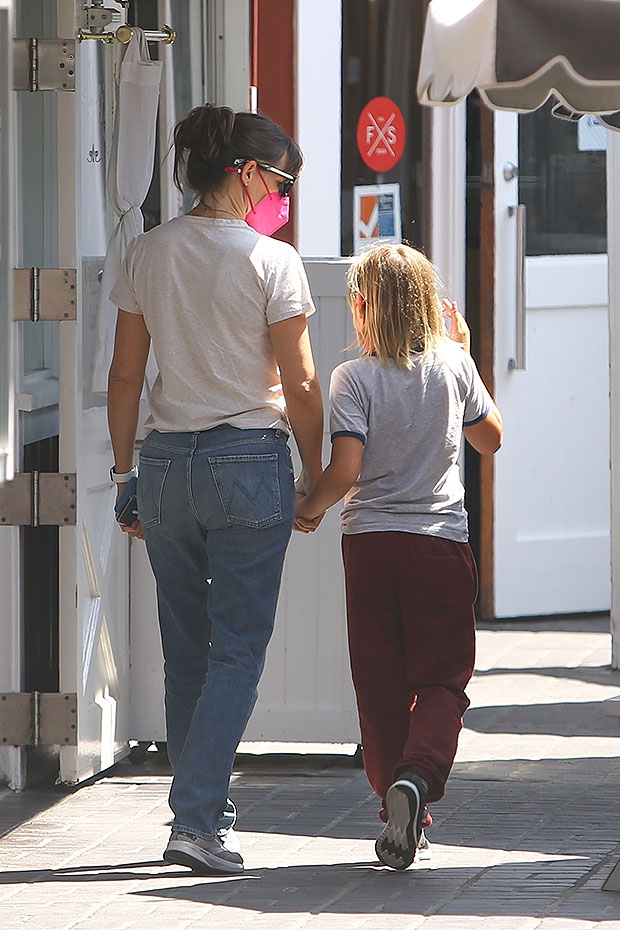 The mom of three wore a relaxed t-shirt and jeans for the outing, while Samuel wore maroon sweatpants and a heather grey t-shirt. Jennifer also brought along a bright pink surgical face mask amid the ongoing COVID-19 pandemic. The 13 Going on 30 star also shares daughters Violet, 15, and Seraphina, 12, with her ex-husband.

The mother-son date comes amid reports that Jennifer’s children will soon meet John Miller following their reported recoupling. Us Weekly previously reported in May that the actress and her CEO boyfriend are “back on” after splitting early last year. Following their reunion, the outlet reported earlier this week that Jennifer’s three children are expected to meet John’s two daughters from a previous marriage soon.

Revealing that the two are “really going strong and getting more serious,” a source told the outlet: “They are spending a lot more time together. They have been keeping their kids separate from their relationship for a long time, but now plan to incorporate their kids more.” The reports come after the children have met Ben’s rekindled flame Jennifer Lopez and her twins, Max and Emme, both 13, with ex-husband Marc Anthony.

Ben and J.Lo, who resurrected Bennifer 1.0 in May after splitting in 2004, have spent time with each other’s children already, having gone to Universal Studios Hollywood and a showing of Broadway’s Hamilton together. A source previously told HL that the two are “dedicated” to making the relationship work — and that Ben is “protective” of her and the children. “Their connection is very real, and they’re dedicated to making this relationship work,” the source said, adding that J.Lo loves that Ben is “protective of her and the kids” when out in public. “Being with him feels like no time has passed.”