Back in 2018, writer, executive producer and showrunner Brad Ingelsby (Out of the Furnace, The Way Back) got talking to a police officer friend from back home in Delaware County, PA. An idea began forming: Why not write about a woman detective from that community?

Ingelsby felt that the heart of the story would be how Detective Mare Sheehan grappled with the grief of losing her son, and how she would ultimately process that pain—the whodunnit of it all would merely be a part of the setting. And yet, when the resulting story, HBO’s limited series Mare of Easttown, came to screens, so skillfully had Ingelsby woven the web of murder mystery, viewers became obsessed with solving the crime.

Only 48 hours after reading Ingelsby’s script through her agent, Kate Winslet signed on to play Mare. Jean Smart would play her mother, Julianne Nicholson her best friend, and Evan Peters the hotshot detective deployed from the big city.

But to pull this off, to really embody the community of Delaware County (aka “Delco”), Ingelsby’s cast and crew would need to get every detail just right, starting with an incredibly difficult accent—one that boasts vowel sounds quite unlike any other dialect in the world. Winslet insisted on pursuing it, and the production recorded local voices for the cast to listen to, along with hiring local accent coaches.

Also notable was the need for a believable local smörgåsbord of snacks in Mare’s family home. In Ingelsby’s very first episode, “Miss Lady Hawk Herself,” which is highlighted below in Deadline’s It Starts on the Page award-season series looking at buzzy TV scripts, we see Mare squirting aerosol cheese onto chips at her kitchen table. In another, she barely chews her Philly cheesesteak while talking. She drives to work with a collapsing breakfast sandwich in hand. And a bottle of local favorite Rolling Rock beer is rarely far from her fist. Everything had to be spot-on, from the costume design that saw Winslet kitted out in unselfconscious clothes, to the exact right pair of sneakers, to the mismatched home decor and the local Wawa store coffee.

This combo was ultimately so compelling, SNL even created a skit about the show called “Murder Durder”—a play on that unique accent. 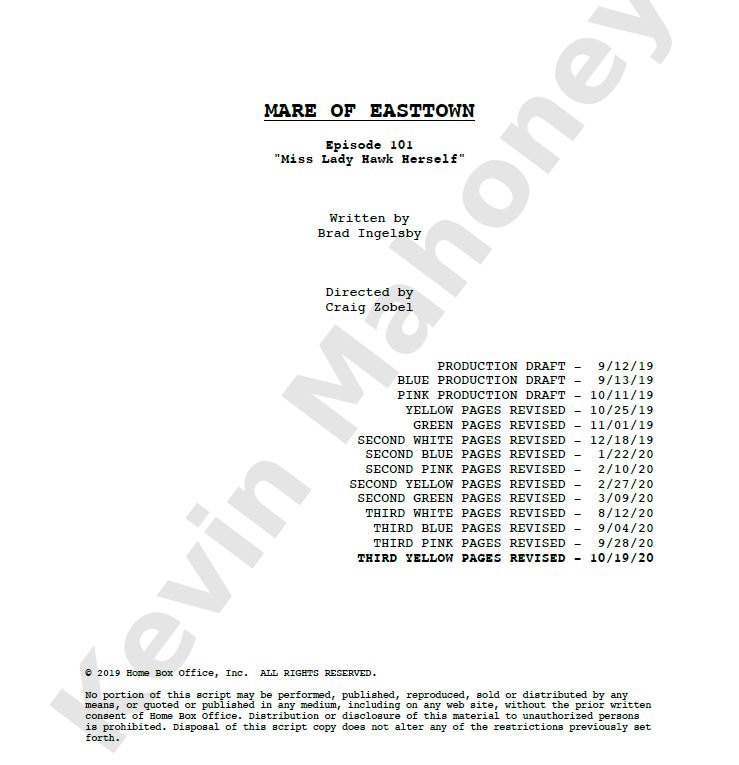