Today, Variety announced that the Insecure star officially inked an eight-figure production deal between her Hoorae media company and WarnerMedia. The new partnership will give HBO, HBO Max, and Warner Bros. television exclusive rights to Rae’s upcoming work, as well as a first-look film deal that includes brands such as Warner Bros. Pictures Group, New Line, and, again, HBO Max. Though Rae and WarnerMedia declined to comment on the exact amount of the major deal, Variety reported that it’s worth $40 million over the duration of five years.

“It’s really exciting to have that flexibility and just deepen the relationship that we already have. Hoorae already had at least 15 projects in various stages of development with them, so we’d been working with them on the drama side, the unscripted side, and the documentaries side for a couple years now,” Rae told Variety. “When people believe in you and build with you, I tend to want to further that relationship. That’s just been a staple of mine with so many of the people that I work with.” 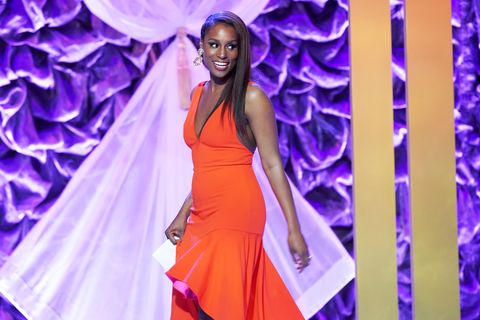 Rae is currently finishing up filming the fifth and final season of Insecure, a series that, according to HBO and HBO Max’s chief content officer, Casey Bloys, proved to company executives that Rae is a talent worth investing in for the long haul.

“She’s obviously very talented and she’s very prolific,” Bloys told Variety. “It’s been very good to work with Issa personally, but also as a company, because she’s seeded a lot of talent elsewhere. Insecure always scores very high when it’s on and I think that says a lot about the fan base, that she’s telling a story that a lot of people want to hear.”

Back in February, Rae reflected on Insecure coming to a close with BAZAAR.com and what she envisions for herself and her career as she moves on from the hit show.

“I’ve definitely been ready to say goodbye. Working on the end of the series and realizing that I’m in the 10th anniversary of [Awkward Black Girl], it’s left me to stop and think, ‘What’s next for me?'” said Rae. “Obviously, the show could grow and the characters can get older, but it just feels like a specific part of my life that I feel like is done. The entire reasoning behind Insecure is to show that this journey to these characters becoming secure in themselves and becoming comfortable being uncomfortable. So, in that way, I’m ready to move on to the next story, but I don’t know what part of myself I’m giving for the next project.”