Lindsie Chrisley has forever felt like the black sheep of her titular family off USA Network’s “Chrisley Knows Best.” Since she eloped with husband Will Campbell in 2012 without father Todd Chrisley’s permission, she’s been the subject of Todd’s lasting ire, with the patriarch telling E! News in 2016, “The level of respect wasn’t there.” Things only worsened after Lindsie’s 2017 departure from the reality series and Todd and Julie Chrisley’s 2019 indictment on fraud and tax evasion charges. Lindsie alleged in a police report that August, per Life & Style, that Todd and brother Chase Chrisley attempted to secure her cooperation by threatening to release her sex tape (Yikes!).

Todd threw dirt back on his daughter by telling E! News at the time (via Life & Style) that she cheated on Will with two stars of ABC’s “The Bachelor,” Robby Hayes and Josh Murray, saying, “For reasons we can only guess at, she ran to the sheriff’s office to accuse her brother of buying a sex tape of her and Robby, which was a complete lie.”

In June 2020, any hopes of a Lindsie-Todd reunion were dashed when she revealed to a fan on Instagram that Todd “didn’t bother to call me on any birthdays through college, or… wished me a happy Mother’s Day once in 7 years.” Extramarital affairs, tax evasion charges, and blackmailing aside, Todd has offered new reasoning in August as to his daughter’s estrangement from the fam. Read on for the puzzling explanation.

Did the Chrisley family squabble start over social media? 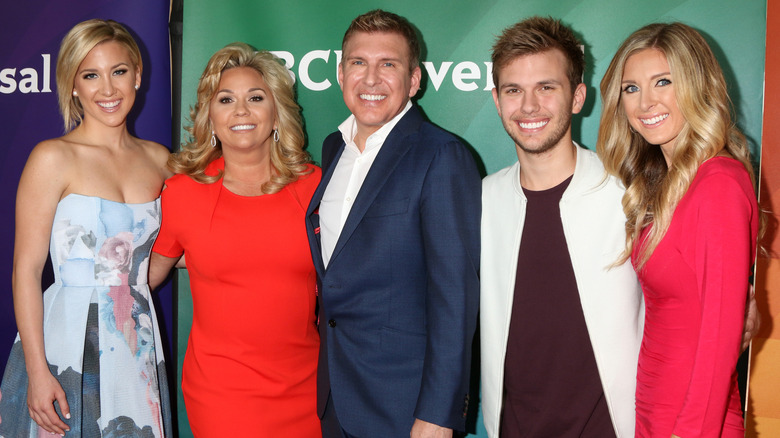 It was a family feud ignited over an Instagram follower count. Yes. In an interview on August 9, Todd Chrisley believes the ongoing beef between his eldest daughter, Lindsie Chrisley, and the rest of the “Chrisley Knows Best” family’s true origin lay in her envy of sister Savannah Chrisley’s Instagram following (Millennials…). “It started out with Savannah having way more social media followers, and then [she] wasn’t getting enough time on the show,” Todd told Entertainment Tonight. “Lindsie wasn’t, at that time, willing to allow the cameras into her personal life. She wouldn’t tell the world anything.”

Todd expanded on his point however, adding that he believed Lindsie’s green-eyed monster over Instagram popularity was rooted in a deeper rift between her and her sister. “There was just some kind of emotional battle that Lindsie has had within herself, and jealousy amongst her siblings,” the reality TV personality mused.

Despite the river of bad blood between him and Lindsie, Todd told ET, “She is my daughter and I love her.” Whether the Chrisley in-feud will ever come to a happy ending for everyone… that, sadly, still remains to be seen.