There are so many Hollywood couples you just can’t imagine breaking up, from Kurt Russell and Goldie Hawn to Tom Hanks and Rita Wilson. Most of the time, sadly, romance doesn’t work out between A-list stars, like Sara Gilbert and her ex-wife, Linda Perry, for instance. The “Roseanne” alum and the singer-songwriter were once a married pair before ending their relationship after five years.

Gilbert and Perry’s love story goes back to the early 2010s, having first sparked rumors they were a couple in 2011, Us Weekly reported. After keeping a tight lip on their romance for a while, the former “Talk” host and creator surprised viewers by announcing the news of their engagement in April 2013. Speaking on the CBS talk show, Gilbert revealed she asked for Perry’s hand in marriage during a picnic that featured both their families, singer John Waite playing his song “Missing You,” and a series of T-shirts that read, “Will you marry me?” according to The Hollywood Reporter.

Gilbert and Perry then wed in March 2014, and after one year, they welcomed their first child together in March 2015. Us Weekly reported the “Poison Ivy” actor gave birth to their son, Rhodes, expanding her family of kids after previously welcoming son Levi and daughter Sawyer with ex Ali Adler. Though it seemed like things were going well for the two, Gilbert and Perry split are five years of marriage in 2019. For more on their separation, keep scrolling. 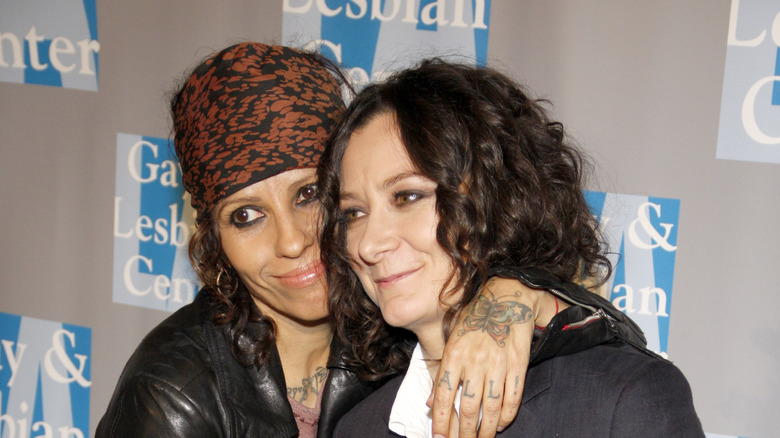 Sara Gilbert and Linda Perry went their separate ways after five years of marriage when the “Conners” actor filed for divorce in August 2019. According to court documents obtained by People in December that year, Gilbert filed for legal separation, citing “irreconcilable differences” as the reason.

At the time the news was revealed, Gilbert and Perry kept a tight lip on the status of their split, but the 4 Non Blondes lead singer broke her silence less than a month later in January 2020. Speaking with reporters during a Hollywood event, Perry expressed how thankful she was for the “incredible” memories she made with Gilbert. “I mean, it’s life, man. Life is happening and you’re witnessing it. I’ve had an incredible journey and I’m still on an incredible journey,” she said, Us Weekly reported.

The former lovebirds have done their best to stay out of the headlines since, but in May 2021, The Blast reported Gilbert and Perry settled their separation case. Though the details surrounding their agreement remain private, Gilbert requested joint legal and physical custody of their son, Rhodes, at the time she filed, per Us Weekly.

Despite parting ways, Perry and Gilbert are “still on good terms,” a source told Closer Weekly following their split. “The marriage didn’t work out, but they still have to co-parent Rhodes and there are no plans to avoid each other.” Talk about amicable exes.