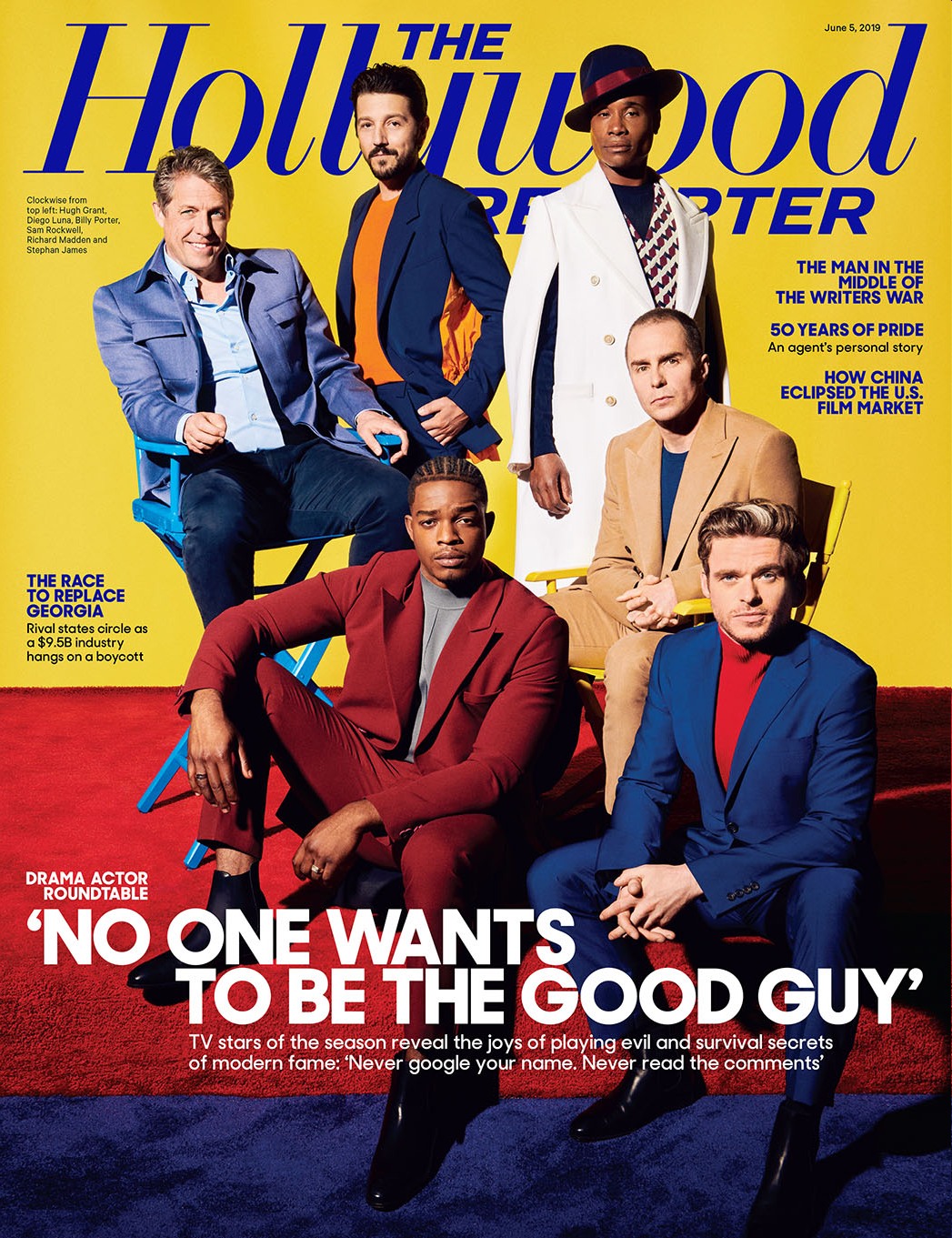 I’m pretty convinced that Hugh Grant is probably a complete a–hole if you really know him. He says that about himself and people are always like “No, that can’t be true, you’re so British and charming!” But really, he’s just an a–hole with a posh accent and some wit. We should believe him when he tells us that. The funny thing is, that combination of wit, charm, poshness and assholism makes for wicked combination in interviews. Say what you will about him, but Hugh Grant is ALWAYS a great interview. So it was during the Hollywood Reporter’s TV leading-man roundtable. The roundtable included Grant, Sam Rockwell, Stephan James, Billy Porter, Diego Luna and Richard Madden. Hugh dominated the conversation because he was the funniest and he was telling the truth the whole time. You can read the full piece here. Some Hugh-specific highlights:

What would surprise people: “How nasty I am… People saw all those romantic comedies where I was being a nice guy written by Richard Curtis, who is a very nice guy, and they used to think, ‘Oh, Hugh must be like that,’ but I’m vile. Really.”

His impressions of Hollywood: “It was so long ago that anyone was nice to me [in Hollywood], it’s kind of hard to remember. It was after I made Four Weddings and a Funeral, and I came out as a hitherto unknown crap actor. (Laughter.) And suddenly big studio people were sending me baskets. You know, there are endless baskets. I was spending all day, every day just undoing baskets. Turning on and off lights in enormous suites. It was quite fun. And people used to say extraordinary things to me, like, “Missing you already.” What? I’ve only just met you today. The level of phoniness was fantastic. I enjoyed all that.

Hugh permanently had an inferiority complex because he’s just the rom-com guy: “Well, yes, but less now because I’ve gotten too old and ugly and fat to do them anymore, so now I’ve done other things and I’ve got marginally less self-hatred… I was being paid tons of money. I was very lucky. And most of those romantic comedies I can look squarely in the face — one or two are shockers, but on the whole I can look them in the face and people like them. And I am a big believer that our job is to entertain. It’s not to practice some weird, quasi-religious experience. I see us as craftsmen along with the guy who does the lights and the guy who edits and the guy who pushes the dolly.

His early days: “The difference was when I was unemployed, I took everything. The worse it was, the quicker I took it… in fact, quite enjoyed it. You think, “Oh, well, this is nonsense, this film [1988’s Rowing With the Wind], it’s being made in Spain with English actors, with a director who doesn’t speak English and German money, it’s never going to see the light of day, so just go and have a nice time for three months, flirt with the actress playing Claire Claremont” [Grant’s former girlfriend Elizabeth Hurley]. Have you ever done those? I used to call them Euro Pudding.

Deciding to do A Very English Scandal: “Oh, well it wasn’t really a hesitation, it was just pure snobbery. But I’d done Florence Foster Jenkins with Stephen Frears and he sent me this thing [A Very English Scandal], it was three scripts. And I thought, “Television? I don’t do television.” And then I read them and they were brilliant. And I realize everyone does TV now — I just can’t help having a little hankering for the old days of glamour and cinemas with lots of people in them. Anyway, it’s all gone. But I have to say, I didn’t know which part he wanted me to play. Frears is very good at seeing things in me that I certainly never saw. And he said, “Jeremy Thorpe” [a Liberal Member of Parliament who had to contend with a disgruntled former lover, played by Ben Whishaw, in 1970s England]. So I had to say yes, and then I spent a nice year panicking about it.

You could tell from the transcript that Hugh had everyone in stitches the moment he opened his mouth. And honestly, I love when actors do that – when they reach an age and a place in their careers where they really don’t give a f–k and just say whatever. And yes, he’s probably quite “vile” in real life. But it comes across as so charming and truth-telling in interviews. Also, I love what he says about acting: “And I am a big believer that our job is to entertain. It’s not to practice some weird, quasi-religious experience. I see us as craftsmen.” I love that, because… well, I feel like a lot of actors forget that. 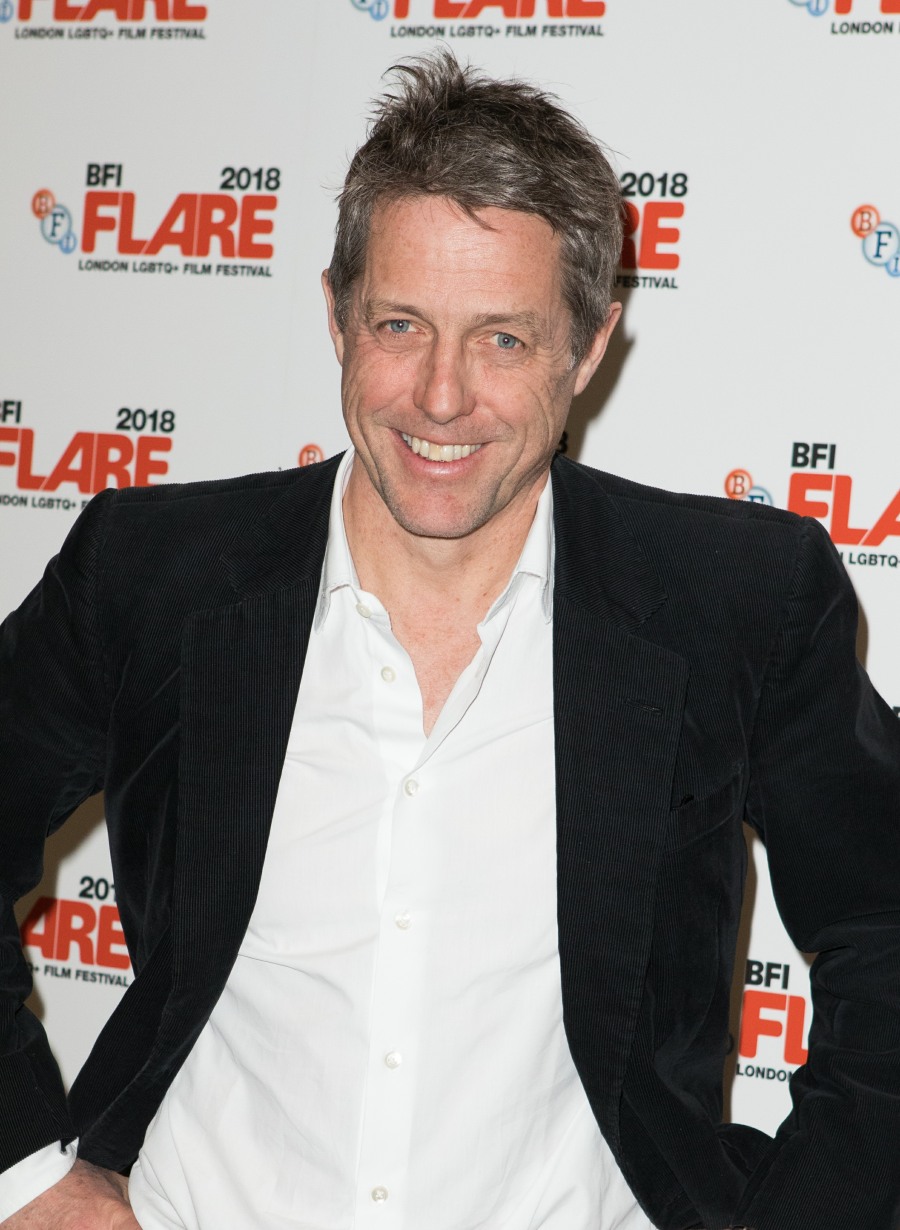