Following Sharon Osbourne’s support of Piers Morgan, Holly Robinson Peete accused her former ‘The Talk’ co-host of saying she was ‘too ghetto’ for the show.

Holly Robinson Peete offered a take on the current drama surrounding Sharon Osbourne’s explosive clash with cohost Sheryl Underwood on the March 10 episode of The Talk – and Holly wasn’t coming to her former cohost’s defense. “I’m old enough to remember when Sharon complained that I was too ‘ghetto’ for #theTalk…then I was gone,” tweeted Holly, 56. “I bring this up now [because] I was mortified watching the disrespectful, condescending tone she took w/her co-host, who remained calm & respectful because…she HAD to.”

Peete was one of the original panelists on CBS’s The Talk, along with Sarah Gilbert, Julie Chen, Marissa Jaret Winokur, Leah Remini, and Sharon. Marissa, Holly, and Leah, would be gone after the first season, and during a 2012 Twitter Q&A, Leah claimed that Peete echoed today. “Sharon thought me and Holly were ‘ghetto’… we were not funny, awkward, and didn’t know ourselves,” wrote Remini, per Variety. “She has the power that was given to her.” Sharon refuted the comments the next day on Facebook.

“In response to Leah Remini’s continuous comments that I had her fired from The Talk, let me just go on the record to say… I had absolutely nothing to do [with] her departure from the show & have no idea why she continues to take to Twitter to spread this false gossip,” Sharon wrote in the since-removed post. “Leah knows that I have never been in the position to hire or fire anyone on the show…It’s been seven months. It’s time to move on,” Sharon tweeted. 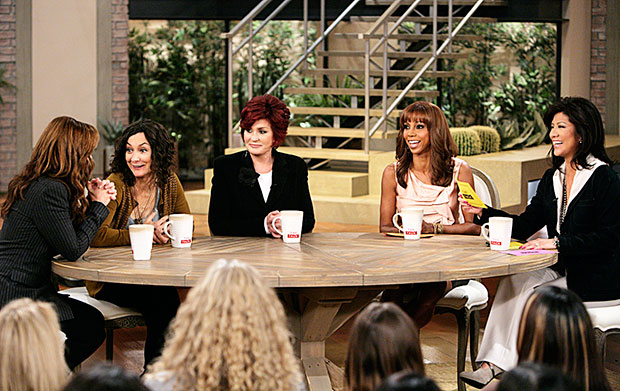 Holly’s accusation comes hours after Sharon apologized for exploding on the March 11 episode of The Talk when Sheryl suggested that supporting Piers Morgan after the vicious things he’s said about Meghan Markle could come off as racist. Piers walked off Good Morning Britain and later quit after being called out by one of his co-hosts. Sharon lashed out at Sheryl on the show, challenging her to prove why she’s allegedly racist.

“For me, at 68 years of age to have to turn around and say ‘I ain’t racist’ – what’s it got to do with me? How could I be racist about anybody? How could I be racist about anybody or anything in my life? How can I?” Sharon yelled. After cutting to commercial Sharon continued to rant. Sheryl finally got the chance to respond and explained that “To not want to address [Piers Morgan’s comments] because [Meghan Markle] is a Black woman, and to try to dismiss it or to make it seem less than what it is, that’s what makes it racist.

“But right now, I’m talking to a woman who I believe is my friend and I don’t want anybody here to watch this and say that we’re attacking you for being racist.” Sharon apologized on March 12 with a statement on Instagram: “I have always been embraced with so much love and support from the Black community and I have deep respect and love for the Black community. To anyone of color that I offend and/or to anyone that feels confused or let down by what I say, I am truly sorry.

“I panicked, felt blindsided, got defensive, and allowed my fear and horror of being accused of being racist take over,” she continued. “There are very few things that hurt my heart more than racism so to feel associated with that spun me fast! I am not perfect, I am still learning like the rest of us & will continue to learn, listen and do better. Please hear me when I say I do not condone racism, misogyny or bullying.

HollywoodLife has reached out to Holly and Sharon’s reps, as well as The Talk for comment on this story but did not hear back as of press time.