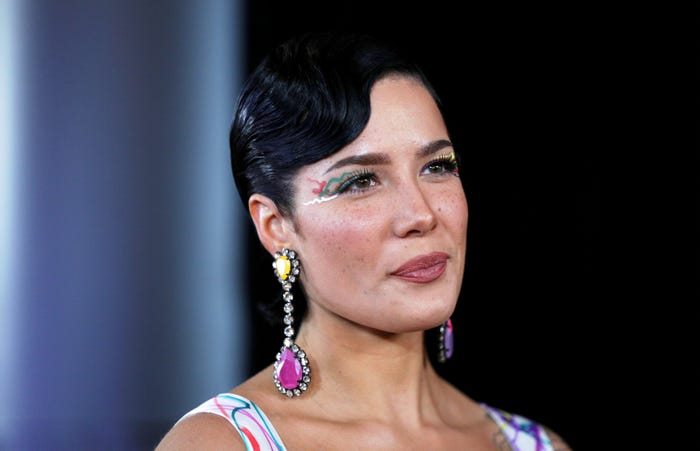 Halsey explores fear, trauma, self-doubt, and failed relationships in her debut collection of poetry, "I Would Leave Me If I Could," which was released on Tuesday.

One poem in particular, titled "Lighthouse," describes the behavior of one toxic ex-boyfriend in vivid, heartbreaking detail — and multiple lines suggest that it was inspired by G-Eazy.

"He was almost 7 feet tall, / with black oily hair / that stuck to his forehead in patches / like a Rorschach test when he'd sweat," the poem begins.

G-Eazy, born Gerald Earl Gillum, is a very tall rapper (reportedly standing at 6'4") who typically wears his black hair gelled and slicked back.

He and Halsey, born Ashley Nicolette Frangipane, dated for over a year before they split in July 2018. Although they briefly got back together, they officially ended their relationship that following October.

Halsey went on to write her hit song "Without Me" about his habitual infidelity and their "heinous" breakup. She has since described his behavior as "abusive" during their relationship.

In "Lighthouse," Halsey writes that the ex-boyfriend in question would "stuff his nose with cocaine" and grow extremely violent, which also checks out: G-Eazy was convicted for assault and cocaine possession in 2018.

"He would punch himself in the head, / banging his fist / against his forehead / and temple / until his fingers / full of rings / left pictures on his skin, / and his knuckles burst open," she writes.

"He would put his bleeding hand around my neck / and press me against the wall. / His eyes would flicker back to life / like a film projector malfunctioning / in a pitch-black cinema," the poem continues.

"and before the title card ran, / he would stare at the space between my eyebrows, / too cowardly to make eye contact, / and say, / 'I'm going to f—ing kill you.' / And I would believe him."

"So I would take his hand / off of my neck gently, / and wrap my arms around his head / like I was cradling a newborn / and stroke his hair / and whisper that it would be okay."

The poem ends with Halsey lying awake in bed next to her lover, trying not to cry, "lest the subtle movement / be enough to wake him / from his docile state."

"Praying the gods would unleash their fury / and send waves so strong / they'd crash through the hills of California. / And the ground would collapse / and bury us both in the rubble."

Some fans have noticed the apparent connection between "Lighthouse" and Halsey's existing insights into G-Eazy's behavior, including visual parallels in the "Without Me" music video.

Halsey previously told Vogue's Ilana Kaplan that much of her poetry collection was inspired by "relationships, betrayal, abandonment, and interpersonal communication."

She also revealed that she "cut a lot of s— out" about sexual misconduct and assault, "because I do have to create boundaries for myself."

"When I sing, the writing is tainted by whatever I look like at that time, whoever people think I'm dating at that time, and whatever they've read about me in the press most recently," she said. "They build a composite of who they think I am, and then that's how they interpret the work. But a book is faceless."