The actress portraying Andie Hardy in ‘Gone Girl’ decides to post the pictures of her look at the CFDA Fashion Awards to prove that she’s not going to ‘lean into the shaming.’

AceShowbiz –Emily Ratajkowski has her own way to deal with body shamers. The actress portraying Andie Hardy in “Gone Girl” anticipated a “controversy” when sharing her abs-baring photos on her social media account.

Making use of her Instagram account on Wednesday, November 24, the supermodel shared a series of photos of her look at the CFDA Fashion Awards earlier this month. When attending the event, she wore a Miu Miu cropped sweater layered over a cropped collared shirt and paired with a long, low-rise navy skirt. She added a black leather clutch to complete her look and kept her hair and makeup natural.

In the caption, Emily, who gave birth to her first child Sly in March, wrote, “Almost didn’t post this bc I knew the controversy it would stir up.” The 30-year-old model added, “But hey it’s my body and I’m not going to lean into the shaming! God bless!”

As if her caption underneath the photos wasn’t enough, Emily shared the in-feed post on her Instagram Story. Over the photo, she added a similar caption. This time, however, she wrote, “But hey it’s my damn body and I’m not going to lean into the shaming!” 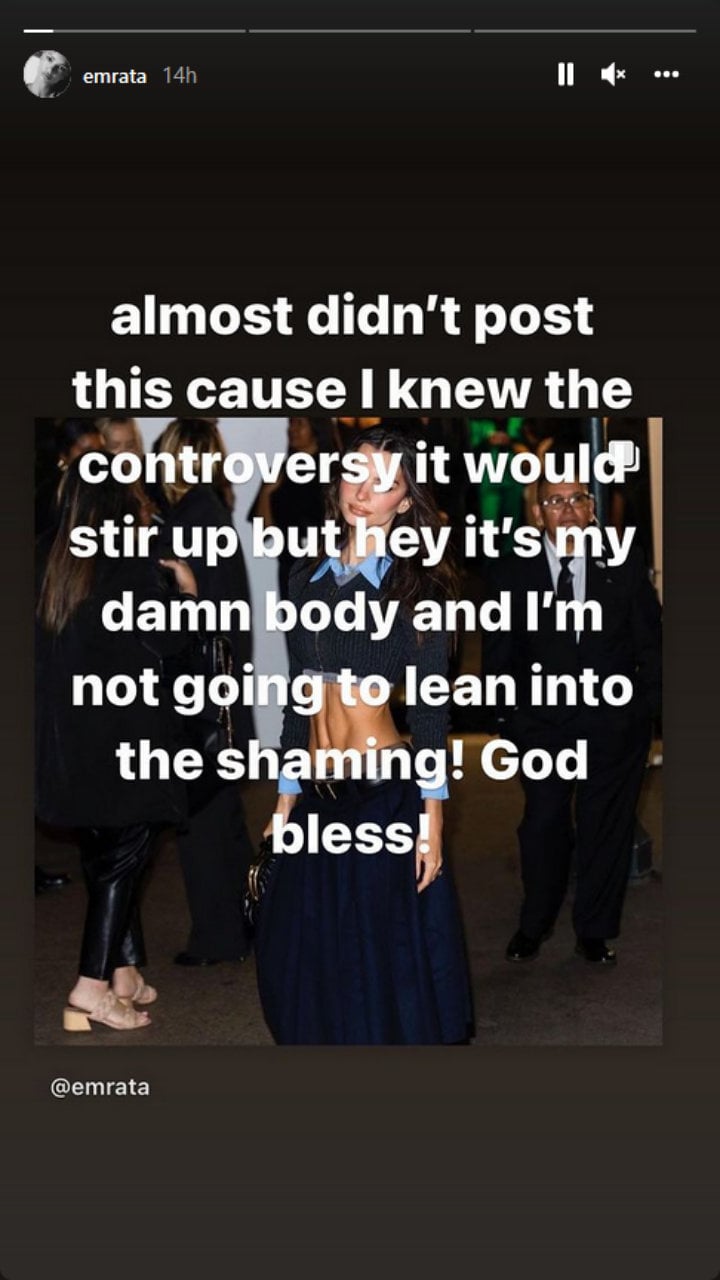 Emily Ratajkowski shares her abs-baring snaps on her Instagram Story.

Emily’s photo was already shared by Miu Miu official account on November 11. In the comment section, however, many Instagram users criticized her look. “Outfits great, luv long skirt, and shoes…but I don’t like her stomach exposed, she doesn’t have a nice tummy, it resembles a treacherous hiking trail I take every morning, and it’s not very classy, plus it’s almost winter(not summer…looks like ur trying to hard for attention). Sorry,” one wrote.

Another person even stated that Emily has anorexia. The comment read, “This is what anorexia looks like. a real disease. this isn’t natural and something we should be concerned about.” One person chimed in, “She doesn’t eat at all??? [shocked emojis].”

However, there were still some fans who defended Emily. “The amount of people criticizing this woman’s body makes me disappointed in the human race. Cruel,” one slammed the body shamers. Another praised her look as saying, “Absolutely stunning….the model, the clothes, the make-up..just stunning!”