The ‘Only Murders in the Building’ star is pictured looking worse for wear as she dances the night away to Wyclef Jean while partying with NYC Mayor Eric Adams and A$AP Rocky.

AceShowbiz –Cara Delevingne knows how to work hard and play even harder. The actress appeared to let loose when attending the Bilt Rewards x Wells Fargo Private Launch Event party at Summit One Vanderbilt in Manhattan.

According to eyewitnesses, during the event on Monday night, March 28, the 29-year-old model partied hard alongside New York City Mayor Eric Adams and rapper A$AP Rocky. She was seen dancing up a storm with Wyclef Jean, seemingly having had too many drinks.

A source tells Page Six that Cara “seemed really drunk.” She was pictured having a drink in one hand as she was also carrying an unopened bottle of her vegan prosecco brand Della Vite all night.

“Wyclef asked for people to come up on stage and she was pulling all these guests up and was dancing her face off with everyone. She was totally Wyclef’s hype man,” a source says of the stars’ wild party.

Cara reportedly showed “crazy” dances as the source further dishes, “Her dance moves were crazy. At one point she was doing what can only be considered a jig.” The spy goes on detailing, “She dropped her phone, she head banged, she was making all the wild faces that made her so famous.”

The “Suicide Squad” star opted for an all-black ensemble for the outing. She wore a skintight base layer under a cropped blazer featuring wild lapels with high-waisted leggings held up with slim suspenders that crisscrossed her torso.

She accessorized with several necklaces, statement rings and bracelets, while her long blonde hair was pulled into an updo. As she danced the night away, her locks became disheveled, but she didn’t seem to care as she continued to have a blast. 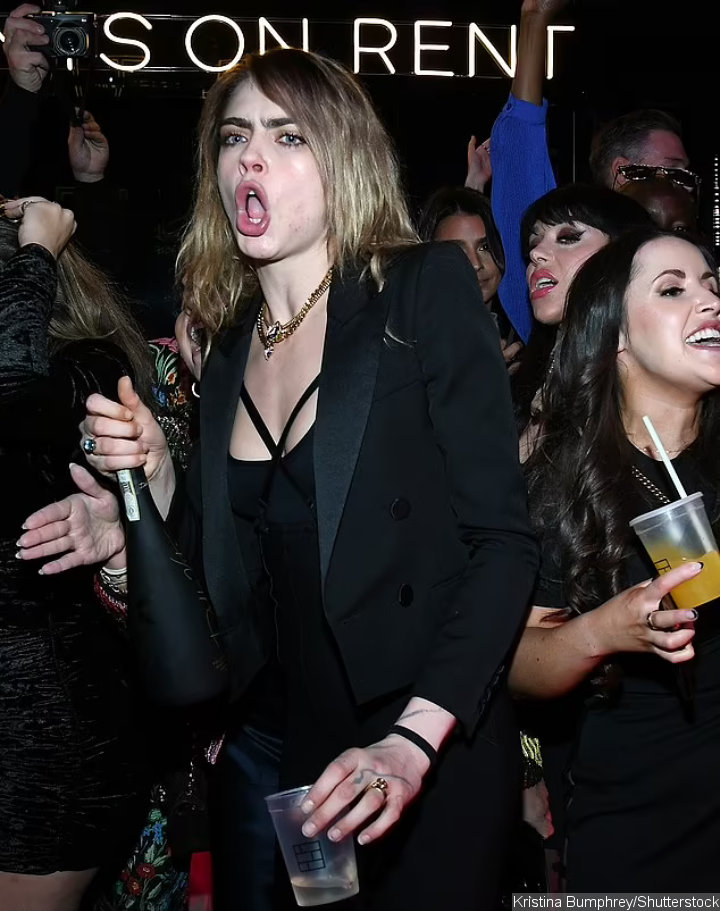 Cara Delevingne looked ‘drunk’ on a wild night out in NYC.

As for Wyclef, he reportedly made a reference to Will Smith slapping Chris Rock at the 2022 Oscars. He played a number of tunes and told the DJ at one point, “Sound man, don’t let me hear feedback, I don’t want to have to Will Smith you.”

During the party, which was a promotional event for a Wells Fargo credit card, Mayor Eric Adams urged people who had moved away from New York City in recent years to return to the Big Apple. “Everyone who moved to Florida, get your butts back to New York City because New York City is where you want to be,” he told the crowd.