• The first teaser trailer for Doctor Sleep dropped this afternoon.
• The movie, which stars Ewan McGregor, is a direct sequel to The Shining, 39 years in the making.
• It hits theaters this fall.

It’s not often that any sequel comes nearly fifty years after the original, but that’s what Warner Bros. is attempting to pull off this summer with its follow-up to a true horror classic.

Enter Doctor Sleep, which will hit theaters on November 8th, 39 years after The Shining was released. The Shining isn’t just any property though; based on Stephen King’s third novel of the same name (published in 1977), the film adaptation of The Shining eventually fell into the hands of visionary director Stanley Kubrick, and starred Jack Nicholson in what might just be the most iconic role of his legendary career.

Doctor Sleep, which is based on King’s 2013 novel of the same name, just released its first trailer, and it looks like a doozy. We already know that the movie took the opportunity to recreate scenes from the original Shining to fit in with this film’s storyline, and we can see a few chilling images of that. From the long hotel hallways to the blood-filled elevators, it looks like Doctor Sleep has found a way to capture the nostalgia (if you can call being terrified for two hours straight and loving every second of it nostalgia) of The Shining, while working it into a brand new vessel. Also, the music cues at the very end of the teaser are absolutely perfect—what a great tribute to the original film.

With It: Chapter Two set to hit theaters in September, and Doctor Sleep following a few months later, it might just be the autumn of Stephen King at the movies.

Here’s what more we know about Doctor Sleep:

How is Doctor Sleep connected to The Shining?

Stephen King’s 2013 novel, Doctor Sleep, functions as a direct sequel to his own 1977 novel, The Shining. The 2019 film plans to function in the same way with the 1980 original.

The main character in Doctor Sleep—Ewan McGregor in the trailer—is Danny Torrance, the character who was the tricycle-riding, supernaturally gifted son of Jack Nicholson in the original. (Nicholson played Jack Torrance, who throughout the film was slowly driven to murderous insanity, as you might remember). McGregor’s age definitely fits with the events of the film taking place 39 years after the original, his character now with a family of his own, and with scarring memories of what took place during his childhood. 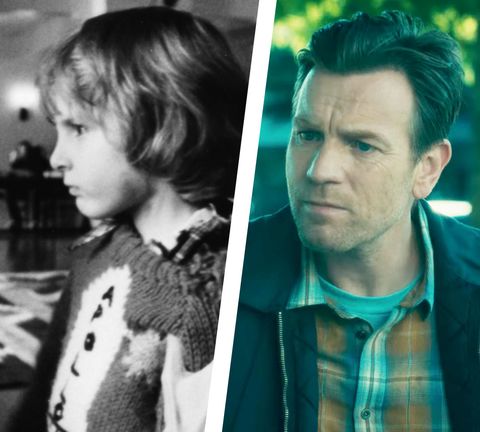 Yes! Not only is the film based on his 2013 novel, but the horror master has also picked up an Executive Producer credit on Doctor Sleep, something he didn’t get on Pet Semetary or either IT film.

Who’s the director? How can anyone follow Stanley Kubrick?

While it’s difficult for literally any director in the history of film to match Stanley Kubrick (who in addition to The Shining also made A Clockwork Orange, Full Metal Jacket, and many other classics), Doctor Sleep‘s director, Mike Flanagan, is no slouch either.

Flanagan certainly seems like a qualified fit for the project after his Netflix series, The Haunting of Hill House, was a big hit with both fans and critics last year. Based on the trailer, he certainly captured the right tone for this sort of project, and it looks like the visuals are stunning to match. Flanagan is also a veteran of directing the horror genre, with movies like Oculus and Ouiji: Origin of Evil on his resumé.

So we know Ewan McGregor’s the star here. Who else is in the cast?

Without a doubt, Ewan McGregor is the star of the trailer, and granted how deeply his character ties into the original, it’s safe to say he’s going to have a lot to do. McGregor is a fantastic actor, and has been for more than 25 years at this point (Trainspotting hive for life). He’s got the chops to carry this thing on his back if he needed to.

But he’s not alone. Rebecca Ferguson, of the Mission: Impossible films is also in the cast as an apparent cult leader. Actor Cliff Curtis, who will also appear in this summer’s Hobbs and Shaw, and character actors like Bruce Greenwood (J.J. Abrams Star Trek movies) and Zahn McClarnon (from prestige TV series Westworld and Fargo) are also in the cast.

When does it come out? I can’t wait.

Doctor Sleep will hit theaters on November 8th, 2019. Get ready to get freaked out.