Tori Spelling reportedly had a clear vision for the Beverly Hills 90210 revival — and it was apparently too unbelievable for some of the show’s writers.

According to RadarOnline, the actress’ demands to rewrite her character more to her liking are what lead to multiple writers walking away from the six-episode project earlier this month.

As we reported, the premise of the upcoming revival was to show the original cast members — including Jason Priestley, Shannen Doherty, Jennie Garth, Ian Ziering, Gabrielle Carteris, Brian Austin Green, and Spelling — playing themselves as they grapple with the idea to make a 90210 reboot.

Earlier this month, it was said that multiple writers for the show, as well as show runner Patrick Sean Smith, had already left the writer’s room due to disputes with two of the show’s lead actresses.

Well, the Radar insider said the drama all stemmed from Spelling, who apparently did not want to play a version of herself that hit too close to reality, which is how the writers wrote her character.

“Tori didn’t want to portray her real life, which is being broke and on the D-list. She wanted to live in a big mansion in Beverly Hills and show the life she envisioned her character would be leading — a life much more glamorous and wealthy than her real life.”

The source added that the 46-year-old “didn’t want to portray the real broke Tori Spelling,” so production tried to accommodate her by cutting her husband Dean McDermott from the show.

That apparently wasn’t enough for Spelling, however, who only wanted to portray herself as “a super wealthy Beverly Hills socialite who lives in a mansion and leads a fairytale lifestyle.” 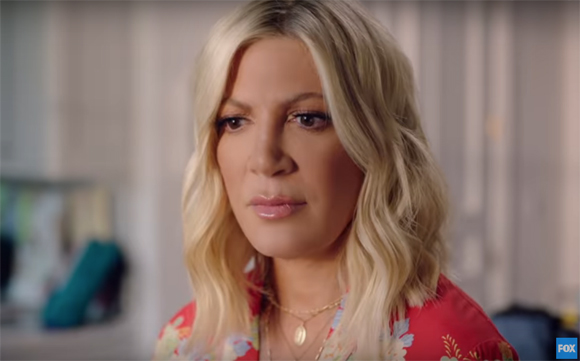 Eventually, per the source, Spelling’s demands made the reboot’s original team of writers decide to quit. Now, the insider says the project is being re-written by a team that’s forced to take direction from Spelling and the cast — all of whom are executive producing the project.

The result, the source adds, is a complete “s**t show”:

“The script now is being written by writers who are taking direction from Tori and the cast and it has been a s**t show on set trying to make it work.”

In Spelling’s defense, though, she was the one who actually pitched the project to producers in the first place. CBS TV Studios president David Stapf revealed back in March:

“Tori Spelling, as she is wont to do, comes in and pitches a lot of ideas and is in our offices a lot. She kicked the idea around of ‘Wouldn’t it be fun to get the whole gang back together?’ … literally put the entire cast together, put a fabulous pitch together with all of them and took it out, and everybody wanted it.”

That said, is it really diva-ish of her to demand that her character be a certain way? Share your thoughts in the comments (below)!