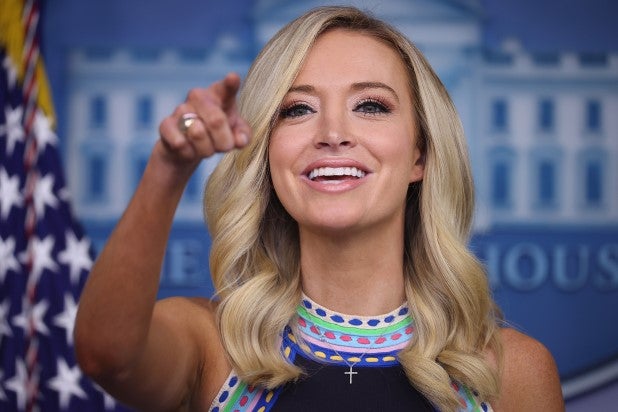 After mentioning Trump’s coronavirus economic response and fast-tracking of a (still-unavailable) vaccine, McEnany said, “His results tell the story, which will make it a debate that is quite easy when you have so many accomplishments to share.”

McEnany confirmed that she, former New Jersey Gov. Chris Christie and former NYC Mayor Rudy Guiliani have been prepping Trump for Tuesday’s first head-to-head with his Democratic rival — but did not specify how much time Trump has spent in preparation or what topics he has been focused on.

“His debate prep happens each and every day,” she said. “When he is at that podium taking questions, vicious questions at that, unfair questions from a media that’s very biased … when he goes to the plane and he gaggles on the way there and on the way back, he takes more questions than any president in history.”

Trump has actually skipped questions at coronavirus briefings, including the day after he recommended that sunlight and injecting bleach can kill the coronavirus back in April. He also ended a press conference on the White House lawn in May when asked why he falsely boasted about the United States’ lead in testing.

McEnany also sidestepped a single question from “Fox & Friends” host Ainsley Earhardt about the Sunday night timing of the New York Times’ bombshell report on Trump’s taxes, which showed Trump only paying $750 in federal income taxes for 2016 and 2017, no income taxes for many other years and debt that amounted hundreds of millions of dollars.

“We have seen this play out before just before debates, inaccurate one at that,” McEnany replied. “This is the same playbook in 2016 and the same playbook that the American people rejected and will do so again.”

Earhardt and her co-hosts did not follow up with any substantive questions about the content of the Times report, based on two decades’ worth of income tax filings.

Check out the “Fox & Friends” video below: