BRIAN VINER: Godzilla is back again, but this time it feels like you’ve been strapped to a speaker at an AC/DC concert!

Godzilla: King Of The Monsters

Relentlessly, spectacularly, unforgivingly brutal. If that verdict pops up on the sides of buses credited to the Daily Mail’s critic, please be aware that he was only talking about this film’s thunderous, two-hour assault on the eardrums.

To say it is loud is to say that Godzilla himself is a biggish lizard. When it was over, I wandered the streets of Central London looking in vain for a Trappist monastery as an antidote.

I settled for the National Portrait Gallery, always a treat, but never before a source of aural therapy. I recommend it. Catherine of Braganza, Oliver Cromwell and Dame Judi Dench all gaze back at you in blessed silence. Even John Lennon keeps his trap shut. Of course, nobody goes to see Godzilla: King Of The Monsters expecting to be mollycoddled, sound-wise. The 2014 film to which this is a sort of sequel, Godzilla, was pretty deafening too. But this is different; it feels like being strapped to an amplifier at an AC/DC gig more or less from beginning to merciful end. 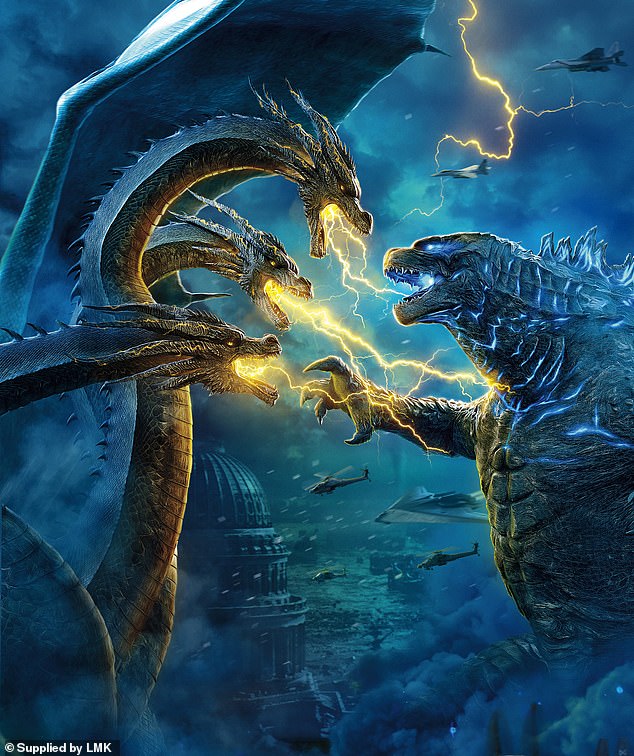 Director and co-writer Michael Dougherty grants occasional breaks in the stupendous noise and extravagant special effects to allow the human characters to speak, generously enabling us to piece together some kind of narrative.

Dr Emma Russell (Vera Farmiga) is a scientist working in China for the ‘secretive monster-hunting coalition’ known as Monarch. Her ex-husband Mark (Kyle Chandler) is in the U.S., researching wolves. They have a spirited teenage daughter called Madison (Millie Bobby Brown).

Someone says five years have passed since Godzilla was last sighted, which makes it sound like he was tricky to spot, but since he was bringing down San Francisco skyscrapers with maladroit swishes of his enormous scaly tail, he wasn’t.

Do bear in mind, though, that Godzilla was on the side of the angels. The real baddies last time were Mutos (massive unidentified terrestrial objects).

This time, the thorns in the side of humankind include a kind of evil earwig the size of a battleship, and an even bigger, nastier monster with three heads and a commensurately huge number of teeth.

Emma, however, has developed a nifty sonar device which, with a spot of urgent knob-twiddling, can hack into the monsters’ communication channels and turn them into gigantic pussycats.

I don’t mean that literally, by the way. For all those old enough to remember the comedy feline colossus which destroyed the Post Office Tower and squashed Michael Aspel, this movie might be at least as daft as The Goodies, but I don’t think it’s intended as a tribute.

Inevitably, there’s a human villain eager to get his hands on Emma’s equipment, and almost as inevitably, he’s a former British Army colonel played by Charles Dance. 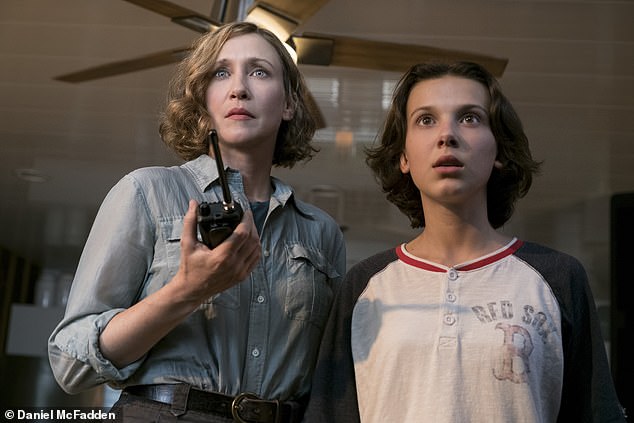 Dr Emma Russell (Vera Farmiga) is a scientist working in China for the ‘secretive monster-hunting coalition’ known as Monarch, she has a spirited teenage daughter called Madison (Millie Bobby Brown)

Anyway, if you’re worried about spoilers then look away now, because even though Dance’s ‘eco-terrorist’ and his goons appear to have kidnapped Emma and Madison, the scoundrel turns out to be in league with none other than Emma herself.

He’s convinced her to use her knob-twiddling to stir the monsters into dishing up nothing short of Armageddon, on the mildly controversial basis that by slaughtering tens of millions of humans, they will ultimately save the planet from the destruction being wrought by its human population, and indeed save humanity itself, what’s left of it.

Maybe, if you search hard enough, this is all a metaphor for something or other. The original 1954 Japanese film used Godzilla to represent nuclear devastation, so that’s probably still it.

Whatever, lining up against this dastardly plan is Mark Russell, though his bigger priority is to find young Madison, as evidenced by his repeated shouts of ‘Madisssonnn!’, and a team of scientists played by Ken Watanabe, Sally Hawkins and Bradley Whitford, among others.

They spend their time looking at screens and crying things like ‘something’s wrong!’ or ‘something’s not right!’ or ‘what’s happening?’, all of which serve no dramatic purpose except to presage another massive monster attack.

Eventually, everything comes to a head in Boston, Massachusetts, or in this case, mass-of-chew-sets, since all the monsters are by now eating each other.

Once we’ve seen a statue of American revolutionary hero Paul Revere crashing symbolically to the ground, we arrive at Fenway Park, home of the Boston Red Sox baseball team, where Godzilla lumbers out of left-field just when he’s least (make that most) expected. It’s not quite his first appearance in the movie, but Dougherty certainly holds him back; an alternative title might have been Waiting For Godzilla.

Still, Godzilla: King Of The Monsters fairly accurately sums up what unfolds here and raises the question of what on earth is going to happen next?

This is the 35th film in the so-called Godzilla franchise, and with a slightly heavy heart it falls to me to inform you that the 36th, scheduled for release as dismayingly soon as next year, will be called Godzilla v Kong.

Take ear muffs and some paracetamol.

Named after a Bruce Springsteen song, Thunder Road begins in arresting fashion — no pun intended — with a small-town uniformed cop delivering a eulogy at his mother’s funeral.

He is Jim Arnaud, and he is played, beautifully, by the movie’s writer-director Jim Cummings, who gives us a ‘tour de force’ of acting, writing and directing all in one, by presenting the eulogy in a single compelling shot lasting more than 11 minutes.

It establishes Jim’s character perfectly. As well as grief-stricken, he is vulnerable, hapless, anxious, angry and plainly teetering on the cusp of a nervous breakdown. For the rest of the film, we see him lurching through his life, trying to reconcile the demands of policing with the stresses of bereavement, divorce, dyslexia and single fatherhood, and if not always failing, certainly flailing. It sounds sad, and it is, but it is also extremely funny. 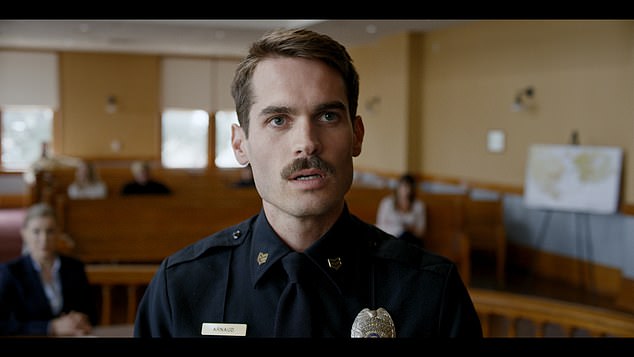 Jim Arnaud is played, beautifully, by the movie’s writer-director Jim Cummings, who gives us a ‘tour de force’ of acting, writing and directing

In some ways, Jim is a more huggable version of Ricky Gervais’s David Brent. His jokes either misfire or backfire; even his young daughter runs into school just as he’s about to deliver a fatherly homily: ‘Give a mouse a cookie . . . hey, I love you!’ It’s a great snatch of dialogue, typical of a very good picture by a filmmaker himself on the cusp . . . of stardom.

Rory’s Way is also reliant on a single charismatic performance. Brian Cox plays a crotchety old Scotsman, who leaves his Outer Hebridean island for San Francisco, not so much to see his semi-estranged son, American daughter-in-law and new baby grandson, but to seek urgent medical treatment.

Will his mortality teach him how to love in the nick of time? Will a museum curator (Rosanna Arquette) fall for him despite his rudeness? You can guess. Rory’s Way is crammed with cliché, and the narrative is terribly clunky in places; it looks like a novel adapted not very expertly for the screen, which is exactly what it is.

Yet it has a trump card in Cox, who holds it together with the excellence of his acting.

Director Tate Taylor’s 2011 film The Help bagged Octavia Spencer an Academy Award for Best Supporting Actress. He also cast her as Aunt Honey in the 2014 James Brown biopic Get On Up.

But this time she’s very much centre-stage as the title character, otherwise known as Sue Ann, a small-town veterinary nurse who doesn’t nurse anything quite as devotedly as she does a decades-old grudge against the high school classmates who once made her life a misery.

A series of flashbacks show us that her enduring resentment is well-founded. At one level, Ma — produced by the horror-film specialists Blumhouse, but more a psychological thriller than a horror flick — makes a powerful case against the iniquities of bullying. Not that many victims take their revenge with quite as much calculating and pathological cruelty as Sue Ann. 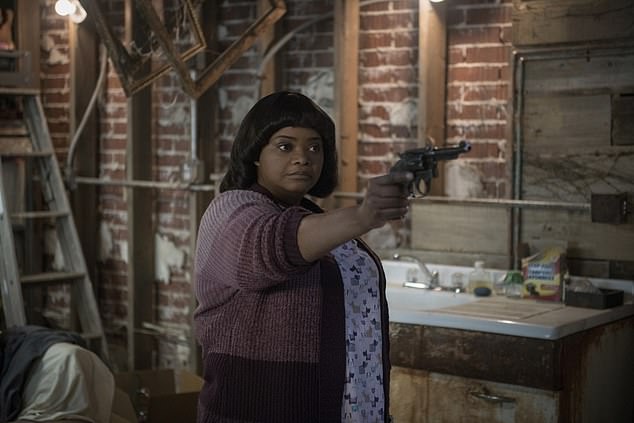 Just to ensure that we don’t feel too sorry for her, Taylor and his co-writer Scotty Landes give her a teenage daughter whom she abuses in a form of Munchausen syndrome by proxy — convincing the child that she is ill. Nonetheless, if this film has an overriding message, it’s that adult flaws and foibles are forged in childhood.

Sue Ann’s flaws run deep. We are introduced to her through 16-year-old Maggie (Diana Silvers), newly arrived in town with her single mother, Erica (Juliette Lewis).

Erica grew up locally, so Maggie goes to her mother’s old high school, and is quickly befriended by a group of classmates who loiter outside a mini-mart pleading with grown-ups to buy booze for them. When Maggie approaches Sue Ann, she obliges.

She seems friendly, mumsy even, and the teens begin to call her ‘Ma’. She lends them the basement of her secluded rural home as a place to gather and get drunk well away from disapproving parents and police, and starts partying with them.

Only gradually do they begin to realise what we already know, that her hospitality is all part of a twisted agenda.

Taylor, who gives himself a small part as a cop, keeps all this moving forward very deftly, building the tension and foreboding without sacrificing the story’s credibility. In last month’s release Greta, a strikingly similar film in which Isabelle Huppert played the loopy title character, credibility seeped away until finally there was none left at all.

Taylor can also credit his cast for keeping it real. Spencer is terrific in a role for which she’s not the most obvious fit, and even the small parts are filled by class acts such as Luke Evans and Allison Janney, an Oscar winner herself, but taking merely a cameo here as Sue Ann’s grumpy boss.