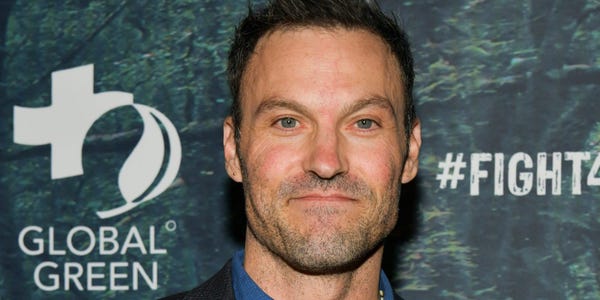 Actor Brian Austin Green clapped back at critics who commented on his sons' hairstyles.

On Friday, the former "Beverly Hills, 90210" star posted a selfie on Instagram where he's pictured with his three sons. He wrote that they were on their way to Target.

The selfie garnered thousands of comments, with some users criticizing the actor's sons' hair and sharing their opinions that the styles looked "too long" or not representative of what "boys' hair should look like."

"There's something not right when they all look/dress like girls," one user wrote.

"Bible talks about males shouldn't have long hair like a female," another commented.

"The fact is my boys have and like long hair. In my opinion, they are beautiful and will still be and possibly be mistaken for girls if they wore matching short and T-shirt combos and had short hair," Green wrote. "Some people like boys and men with long hair. Some people don't. Both opinions are ok."

Other users expressed their support for Green's response.

"Why are people so obsessed with their hair? They are little kids. Leave them alone," one user wrote.

"Your boys look gorgeous and you should be proud for being supportive of their choices," another fan wrote on Green's Instagram post.

Green shares Noah, 7, Bodhi, 6, and Journey, 4 with actress Megan Fox. He also has an 18-year-old son named Kassius who he shares with ex and former "Beverly Hills, 90210" co-star Vanessa Marcil.

Green and Fox met while filming the TV series "Hope & Faith" together in 2004, and they got married six years later in 2010. In May, Green announced on the "…with Brian Austin Green" podcast that he and Fox had been separated since the end of 2019.

"I'm calling you girlfriend, what the f—' life imitated art on that one," he tweeted.

The two have since been pictured together around Los Angeles and on vacation together in Puerto Rico.

On an episode of the "Hollywood Raw" podcast published on August 3, Green spoke about co-parenting with Fox amid their recent separation.

"There's no rule book to it. There's no way of doing it right or doing it wrong. We are learning as we go. The important thing for us is just communicating as much as we can," Green said.

Green and Fox are not yet divorced. On his Instagram live on August 30, Green said he wouldn't rule out getting back together with Fox.

Representatives for Brian Austin Green did not immediately respond to Insider's request for comment.