Only devoted fans of the show Psych, which went off the air in 2014, will likely remember a relatively minor detail from the 2009 episode “Shawn Gets the Yips.” In one scene, Shawn Spencer—the show’s protagonist—is shown frantically working out on an elliptical. A note attached to the machine reads: “If your heart rate drops under 150 you DIE.” In addition to being a shameless nod to Speed, the note turns out to be a pretty cruel gag—a ploy to make Shawn work out.

Many years later, long after most people had moved on from Psych, Ryan Sterbenz recalled that scene. Sterbenz, 30, an aerospace engineer who lives in Arizona, had put on a few pounds and felt inspired to make a change. (His turning point: “When I bought a pair of sweatpants,” he jokes.) Sterbenz wondered if it might be possible to rig his television—and by extension, his Netflix account—to his exercise bike. In lieu of the life-or-death stakes proposed on Psych, the consequences of slowing down would merely cause his television to turn off. In short, he’d only be able to watch TV if he was simultaneously working out.

Sterbenz already liked to watch Netflix while working out, but found it was hard to sustain his momentum when he’d get into a given show—he found himself getting too absorbed in the plot, and then biking too slow. So for part of the design, he knew he wanted to fold in a mechanism that would beep at him twice if his pace dropped too much, and would close Netflix altogether if he didn’t heed the bike’s warnings and speed up again.

The design Sterbenz ultimately came up with, he says, works a little bit like a Bluetooth keyboard. “It uses a small Bluetooth chip normally designed for keyboards, and my computer thinks it’s just an ordinary keyboard,” he says. To program it, Sterbenz used an open source platform called Arduino, which allowed him to program the bike using a USB cable and no special tools.

Once he’d programmed the device, the rest was simple: Sterbenz placed a magnet on the bike pedal along with a magnetic sensor next to it. “Each time the magnet lines up to the sensor. it records it as a rotation,” Sterbenz says. “If the bike doesn’t see the rotations happening fast enough—and I’ve ignored its warnings—it tells the computer that certain keys were pressed.” (In this case, Sterbenz programmed the key transmission to be “Alt-F4,” a shortcut for closing out Netflix.) 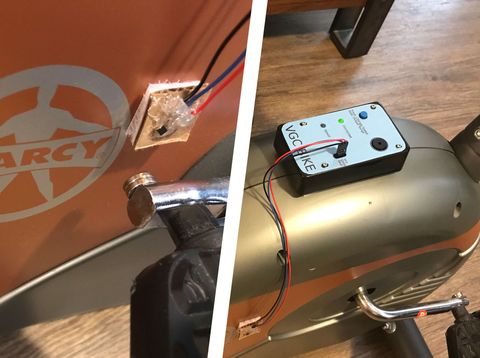 Sterbenz says the project took him just two days, and cost only about $30 in parts. He also emphasizes that the schematics—which you can view here, if you’re feeling inspired—are simple enough for most people with some basic technical skills to follow on their own (without being, well, an aerospace engineer). After using the rig for about a week, Sterbenz says he’s already cycling nearly double his usual amount before it was installed. His desire to keep pedaling, of course, could also have something to do with the latest show he’s just started binge-watching: Chernobyl.

“It’s a great show. I know it’s not Netflix, but thankfully the bike doesn’t care,” he says. “It works for HBO, too.”