It seems Penelope Disick may have taken some inspiration from her mom’s new boyfriend, Travis Barker, after debuting a bright red hair color.

Kourtney Kardashian‘s adorable daughter Penelope Disick has a new ‘do! The nine-year-old, whom Kourt shares with her ex Scott Disick, appears to have taken some rock and roll inspiration from her mom’s new boyfriend Travis Barker by dying her hair bright red. The Poosh founder shared a snap of her mini-me to Instagram on August 26, showing Penelope running her fingers through her hair while posing in an oversized, black graphic tee.

The mom-of-three captioned the snap with a slew of red emojis, including a strawberry, rose and a chili pepper. Little P’s family and friends were quick to jump in the comments section, with Kourt’s BFF Stephanie Shepherd commenting three crying emojis, while a fan suggested she resembled a “Tiny Kylie [Jenner].”

Penelope, who celebrated her 9th birthday on July 8, usually rocks light brown locks, so her fiery new tresses were a total deviation from what fans were used to! Of course, her younger brother Reign has previously rocked a mohawk, so it seems crazy hairstyles run in the family. When she isn’t hanging with her proud mom, she’s with her dad Scott, who is currently dating 22-year-old Amelia Hamlin. 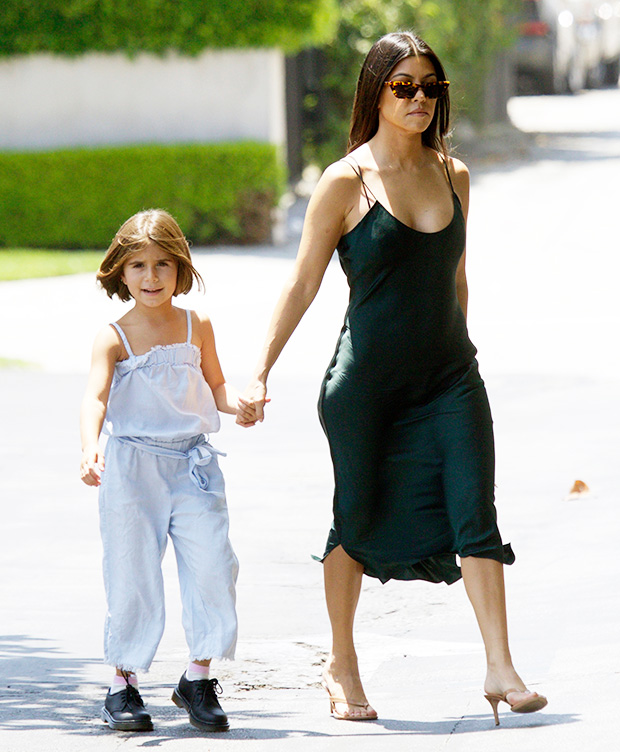 Amelia’s mom, The Real Housewives of Beverly Hills star Lisa Rinna, 58, threw some shade at the father-of-three in a new episode of the hit Bravo reality show. “Why can’t [she be dating] Harry Styles? Why the f*** is it Scott Disick?” Lisa quipped. Scott and Amelia first went public with their romance in November 2020, and they’ve seemingly gone from strength to strength ever since. Amelia has even been pictured spending quality time with Scott’s three kids Mason, 11, Penelope and Reign.

Most recently, Penelope and Mason joined their cousin North West, 8, for an epic lemonade stand. Khloe Kardashian documented the whole event via social media, showing off the cousins’ business savvy skills which they definitely learned from their entrepreneurial grandmother Kris Jenner, 65. “What’s your sales pitch? Tell me what you’re doing here,” the Good American founder asked the kids. “Lemonade, 3 dollars, and bracelets 10 to 20 dollars,” the reality star read aloud.